Locus, the science-fiction writing magazine, reports that Amazon will cease selling ebooks in or to China in June 2023, and that the Chinese will no longer be able to access their library of Kindle purchases. Sales of the Kindle ebook reader in China have already been stopped.

Hurrah, the big OS update for the Kindle Fire 10″ (2019) has finally cured my long-standing “stuck downloads” icons on the Carousel, aka the Home Screen. Newly delivered items can now be pressed on, and “Remove from Home” now works on them. Before this update they were totally unresponsive and “stuck”. So I had turned the feature off.

Here’s how to turn “show newly arrived items” feature back on:

1. Swipe down from the top of the screen and access Settings (it’s the white cogwheel icon).

5. “Show New Items on the Home Screen” turned ON.

Fivverr are now implementing an utterly stupid blanket “robo-ban” on offers of academic book-conversion work. In this case, the blocking of a perfectly legitimate offer to take a finished academic book to the Kindle ebook format, footnotes and all, for sale by the author on Amazon… 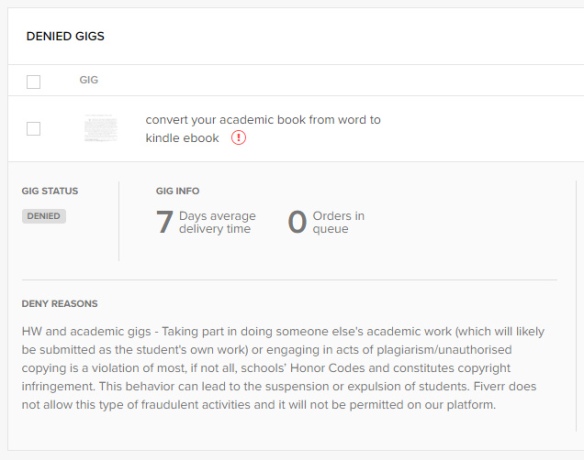 I’m losing count of the number of times I’ve abandoned an Amazon shopping cart for a used paper book, because the Amazon Checkout is trying to trick me into a “we’ve added a 30-day trial of Prime” that I don’t want. I’ve fallen for it once, and don’t want find Amazon attached limpet-like to my credit card again. I’d rather abandon the purchase that risk that happening again, and go to eBay or elsewhere. Amazon, please add a tick-box to the user Preferences labelled: “I have no interested whatsoever in Prime — never tell me about it, anywhere”.

British Comics blog today distils part of the D.C. Thomson formula at Mandy, once an enormously popular pre-80s weekly comic, read by nearly all British girls in middle-childhood and produced by a firm that knew exactly what their audiences wanted (rather than what it was politically correct to give them). This seems rather useful market knowledge for writers of books and comics, as such basic psychology don’t change much at its core and this audience is today a prime demographic. Especially so as in the UK we have the ‘new baby boom’ moving into this demographic. I’ve taken the liberty of pasting the list at British Comics (consider it a quote) and then further grouped these into over-arching categories.

* Trapped by cruel or unheeding authority:

* Trapped by intentional spite (with a sub-text of ‘secrets’):

– girls enduring blackmail, hardship, or unpopularity to protect a secret (often on behalf of their family);
– spiteful girls [manipulating the rules to] cause trouble for an unsuspecting cousin, foster-sister or classmate;

– girls becoming unpopular because events keep conspiring to make them appear jealous or selfish;
– girls who were put under a curse or came into possession of apparently supernatural objects [or pets, such as a black cat] which adversely affected their lives, but of which they were unable to rid themselves until they worked out how;

– heroines adopting masked identities to secretly help people;
– saving animals from cruelty;
– girls pretending to be disabled in order to take advantage of people [and the unmasking of their fraud];

* A Billy Bunter-ish comedy of errors:

– blundering girls getting into one scrape after another. [Often short-sighted or just naturally clumsy].

1. Use the app’s file manager to select a folder of video files.

2. Automatically make a new playlist of all files in that folder.

3. Then apply a best-guess intelligent re-sorting of the playlist order, if file naming is not strictly 001-100.

4. Allow the user to make final adjustments in the playing order, by manual selection of files and moving them via hold-drag.

5. Save the resulting playlist in the folder, in the playlist format for any chosen video player.

Why is this needed? Because no video player I can find has this relatively simple and useful feature. Not even VLC. At present, when faced with a folder of 100 files where the first ten don’t sort correctly on ‘sort by name’ (i.e.: named “8, 9, 10” instead of “008, 009, 010”), one has to first fiddle on the Windows desktop with something like Winsome File Renamer, to get everything re-named in the correct 001-100 order. This is so that ‘sort by name’ will then give you the correct playing order in an app like VLC 3.x. Then you copy the files over to the Kindle Fire.

Here’s a simple demonstration of the file-name sorting problem that happens with ‘sort by name’, and that needs to be solved:

The aim here is to transfer large amounts of files from your PC to the Kindle Fire HD. The paid version of ES is being used, and an old paid version of the venerable WS_FTP.

1. Install the latest ES File Explorer 4.x on your Kindle, then click its prominent “View on PC” button. Then press the “Turn on” button-bar at the bottom of the screen. ES will then present you with an ftp address in the following format:

2. On your PC, your trusty old WS_FTP software now requires this address entered and saved in its Site Manager. But it must be in the following format:

This last item is found in the ftp:// address given you by ES File Manager 4, and is located at the end of the address after the “:”.

Entering the site this way will give you a Site Manager entry that will always allow swift access to your Kindle, provided you first turned on “View on PC” in ES File Manager 4.x. You will no longer have to manually type out the ftp address each time.

(For added security, you may want to use in combination with the simple wi-fi toggle app Wifi Turn On, Wifi Turn Off).

Story-world chronology reading-order, for the original Adventures of Blake & Mortimer.

The English translation titles listed below are the Edgar P. Jacobs original volumes, or ‘albums’ as the French and Belgians term them. Edgar Pierre Jacobs’s Blake & Mortimer appeared in 1946 and had the ‘clear-line’ art style of Tintin and similar lettering. They told of Professor Philip Mortimer, nuclear physicist, and Captain Francis Blake, the dashing head of British spy service MI5. In a slightly ‘alternative history’ world, the pair encounter adventures in the realms of extraordinary science, mysterious archaeology, and sinister plots. Imagine the 64-page Commando format crossed with Tintin and James Bond.

All these are available for the Kindle Fire 10″. Dates are for the ‘in-story world’, not the date of publication.

The Affair of the Necklace.

There are other volumes created later, by others, that ably ‘fill in’ around the timeline. Of these, you may want to start with “Plutarch’s Staff“, which provides an ‘origin story’ for Blake & Mortimer set in 1944.

Microsoft… “challenges you to build an AI agent that can win simplified text-based games. Enter your submission for a chance to win $2,000 USD and more in prizes”.

One for the writers out there. Small Wars Journal‘s Mad Scientist Science Fiction Writing Contest 2019. What will a boots-on-the-ground European battle between ‘Donovia’ (standing in for Russia) and the USA look like in 2030? Deadline: 1st April 2019. 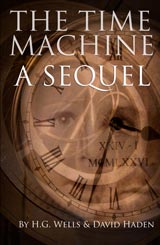 Read the amazing sequel to H.G. Wells's famous science fiction novella! Buy for the Amazon Kindle on Amazon U.S. or in paperback on lulu.com.